What is Liver Cancer? 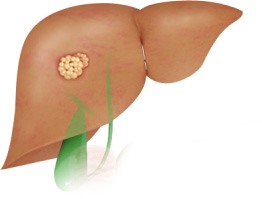 Cancer is the uncontrolled division of abnormal cells. Liver cancer may begin as a mass of abnormal cells called a tumor. Benign tumors remain localized and do not spread to neighboring tissues. Malignant tumors begin to spread to nearby tissues, lymph nodes or organs, disrupting their function.

Most liver cancers are malignant and may lead to liver failure. The liver is situated in the upper right portion of your abdomen and performs some of the body’s vital functions such as:

The most common type of liver cancer is called hepatocellular carcinoma, which begins in the liver tissue and spreads to nearby organs. Some cancers begin in the bile ducts and spread to the liver.

Most people with liver cirrhosis (a degenerative disease of the liver resulting in scarring and liver failure) can develop liver cancer. The 4 stages of liver cancer are:

The symptoms of liver cancer include:

The common risk factors that can cause biliary tract cancer include:

Your doctor will assess your symptoms and perform a physical exam. The following diagnostic tests or procedures may be ordered:

Treatment depends on the stage of cancer and can involve one or more of the following options:

Chemotherapy is the use of drugs to treat cancer. The drugs may be pills or intravenous injections.

High-energy particles or waves such as X-rays and gamma rays are used to kill or damage cancerous cells.

This involves the use of drugs which specifically target certain proteins in cancer cells to destroy them, but does not damage the other cells of the body.

It involves the use of certain chemicals or heat under local anesthesia to destroy the tumor.

Surgical removal of a part or the whole of the liver is called liver resection or a hepatectomy. Liver resection is usually performed to remove liver tumors. For small and superficially located benign tumors, a laparoscopic approach can be employed for the resection. Liver resection does not require blood transfusion and takes about 3-5 hours. Up to 75% of the liver tissues can be safely removed by liver resection. The patient may be required to stay in the hospital for about 5 days after the procedure. The liver is capable of regeneration. The complete regeneration of the resected liver to its original size may take 6-8 weeks. Good nutrition with a high-protein diet is crucial. However, a cirrhotic or extremely unhealthy liver is not capable of regeneration.